As a country that starts with A listed on Countryaah.com, with an area of ​​28,000 km², Albania is somewhat smaller than Belgium. Around 3 million people currently live in the country; Several million Albanians live outside the country’s borders – among others in the neighboring countries Kosovo, Italy, Greece, Bulgaria, but also in Turkey and Germany. The common language is Albanian (Shqip). 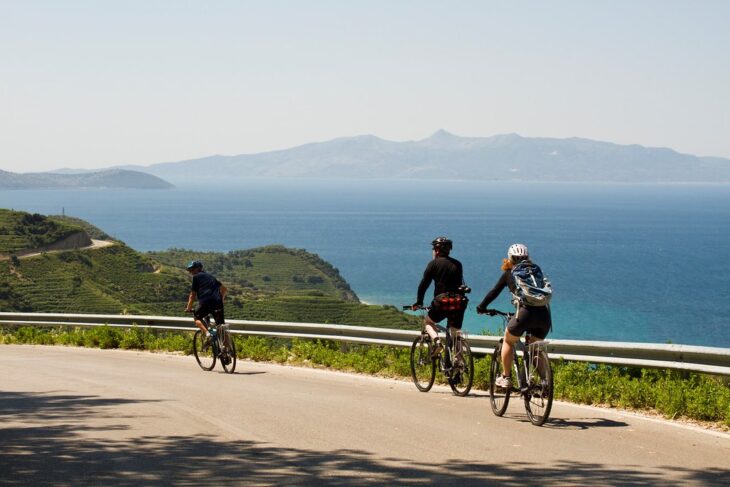 The Albanians often only call their Riviera “Bregu”, “Coast”. There are hidden bays and small beaches to be discovered everywhere, and small villages perch high above the sea. We get into our kayaks, leave the popular seaside resort of Himara and paddle south along the Ionian coast. Our destination: the bay of Porto Palermo, whose history goes back to antiquity. We explore the small peninsula with the fortress of Ali Pasha Tepelena. The tunnel entrance for submarines can also be seen, which dates from the Cold War era, when one of the most important military bases was stationed here. We continue to Qeparo Beach, where we will have dinner and sleep tonight.

This trip is made for athletes who are hungry for exercise: We hike on the flanks of the highest mountain in Albania’s southwest, the Çika (2,045 m), and kayak along the coast. Afterwards we cycle along the lagoon of the Butrinti National Park to the remains of the ancient ruins.

In the evening we stroll through the steep cobbled streets of Gjirokastra, which was included in the UNESCO World Heritage Site as a rare example of a well-preserved city from the Ottoman era. It owes its second name “City of Stones” to the stone roofs of its houses, small fortresses that characterize the quarters around the castle. From up there you not only have a beautiful view of the mountains of Mali i Gjerë, but also of the expanses of the Drino Valley.

We land at Mother Teresa Airport in Tirana, where our guide will meet us. Then we take the minibus to the Llogara National Park. Our view extends over the sea to the Karaburun Peninsula, which borders the southern part of the Vlora Bay. Another drive brings us to the national park. We move into our hotel and end the day with dinner together in the mountain restaurant.

Across the St. Thomas Bridge

“The heels and the tips don’t want to sit anymore” – so in the morning we lace up our hiking boots and walk along the ridge of Sankt Thanasi. This area of ​​the national park opens up panoramas between the mountains and the sea. When the weather is nice, we can look far into the bay of Vlora. Especially olive trees and heather bushes thrive on this peninsula with its barren mountain tops. The scent of thyme, wild mint and other wild herbs permeates our noses. We can organize the afternoon according to our preferences. We can explore the area again or just relax in the hotel. In the evening we dine again in the mountain restaurant.

Today we direct our steps to the Qafa e Eres, from where we have a good view of the Çika, with 2,045 m the highest elevation in southwest Albania. The path leads through pine forests along beautiful viewpoints. When the weather is clear, we have wide views of the deep blue sea. We spend our lunch break in a mountain inn, again with a view of the sea below. Then we say goodbye to the Llogara National Park and continue to Dhërmi, on the Albanian Riviera. While the older district towers high above the coast of the Ionian Sea, a small tourist resort has emerged on the beach. We take our dinner in an inn right by the sea.

Gjipe, Jala & Himara: by kayak along the Ionian coast

Today we will swap walking shoes for swimwear and paddle kayaks along Jal Beach. (Previous knowledge of kayaking is not required!) We dock in the Gjipe Bay, which is surrounded by rock walls, rest in the cooling shade of trees and do a few laps in the sea. Then we will continue paddling to Jal Bay, where we will enjoy our lunch. In the afternoon we continue with the kayak to Himara, where we put the paddles aside for now and relax for the rest of the day.

By kayak from Himara to Qepara

The day is breaking and the kayaks are already waiting for us: Our route takes us along the beaches of Potam, Filikur and Llaman to the Bay of Palermo. In the middle of the bay is a peninsula where we visit the well-preserved castle of Porto Palermo, which was still used by the Albanian military during the communist era. A former submarine base and bunker at the northern end of the bay also bear witness to the area’s former military importance. We finally have our lunch in a small restaurant before we kayak again to Qeparo. Qeparo and its surroundings have played an important role in the cultivation of olives for centuries. The tasty and handpicked fruits of the real olive tree are offered raw or pressed into oil. We stroll over the pebble beach, swim a little in the sea if we want and walk – if time allows – to Alt-Qeparo. Located on a hilltop, this village with its stone houses overlooks the entire bay. Today we are staying in a family-run guesthouse near the beach, where we are served a typical Albanian dinner.

By bike to Saranda

In the morning we swing on bicycles. We cycle along the Albanian Riviera to Saranda. On our way we pass the villages of Borsh, Luková and Piqeras. Saranda is located on the Ionian coast, nestled between hills, on a small bay. Out by the sea, only a few kilometers away, we spot the Greek island of Corfu. The history of Saranda goes back to antiquity, and the city walls still bear witness to this time. In the meantime, bathing tourism in particular has found its way here. The Byzantine church Shën Kollë, which is dedicated to St. Nicholas, and above all the ancient ruined city of Butrint are worth seeing. But more on that tomorrow. Today we can cool off in the sea or stroll a little through the alleys and streets of the city. Today’s altitude is variable.

By bike to the remains of ancient Butrint

We already saw it yesterday, the castle fortress of Gjirokastra, which is lofty on a hill. Today we visit them together with the weapons museum housed there. In addition, we will pay a short visit to the ethnographic museum. Then we go to Berat. The “City of a Thousand Windows” was named a Museum City in 1961 and a UNESCO World Heritage Site in 2008. Berat has the best preserved old town in Albania. Buildings from different epochs shape the cityscape and show the city’s rich past. We stroll through the characteristic Mangalemi district, where we visit another ethnographic museum and deepen our ethnographic knowledge. We continue through the old town. We visit magnificent Orthodox churches and the icon museum of the skilled icon painter Onufri, who worked in the 16th century. In the late afternoon we will be taken to Tirana where we will spend the last evening of our trip.

After breakfast we have some time for short walks or a relaxed visit to the coffee house. Then transfer to the airport and flight home.