Sri Lankan culture has for many years been influenced by the Western world due to the colonial era in the country. Combined with a widespread use of English and busy tourist areas, one can quickly form a false impression of what this amazing island really entails.

Move a layer deeper into the fairytale land and embark on a journey to Sri Lanka . Tourist Travel makes sure to give you an absolutely phenomenal insight into the culture and the country’s gripping history. On this page you can read more about religion and philosophy, peoples, rhythm and tone, food, dress and holidays. Thus, you will be dressed for your next Sri Lanka trip.

It was not until 1948, during British colonial times, that religious freedom was allowed. The people of Sri Lanka practice a variety of religions, but Buddhism occupies a special position as about 73% of the population are Buddhists.

The Buddhist religion in Sri Lanka, plays a significant role in politics. The state has close ties to the monastic order of sangha and often Buddhist monks are involved in politics.

The largest religious minority, the Hindus, are identified with the Tamil people. The Tamil minority makes up about 15% of the population, while Muslims make up 7% and Christians make up 5%, the majority of whom are Catholics.

The Indian Tamils ​​came to Sri Lanka under British colonial rule as workers on the tea, coffee and rubber plantations in the highlands. Both this minority and the native Tamils ​​are primarily shaiva Hindus. This means that they see Shiva as the central god.

The Tamil-speaking Muslims are the so-called Moors – a name derived from the colonial power Portugal. Here, the Muslims who lived on the island gave the name when they arrived in the early 16th century. The origins of the Muslims are Java and India respectively.

When traveling in Sri Lanka, you will encounter a warm-hearted and traditional people. It is good to take off your shoes when visiting temples, mosques or private homes. In addition, cover your shoulders and legs when visiting the temples of Sri Lanka.

Sri Lanka’s culture is based on family groups and closely related village communities. Curiosity is therefore natural, and expresses itself in endless questions. While it may seem overwhelming, be sure to behave politely.

There is no national clothing in Sri Lanka, but women like to wear sari, and men typically wear sarong. The traditions of men’s attire are very simple and clear – men of all ages wear a sarong and trousers.

Women’s attire is more complicated as it depends on age, marital status and event. Often they use a Kandyan Osari or a Kandyan Saree. This depends on regional characteristics, but must be very colorful, bright and ornate.

There is also clothing like Redda Hats, which is a modification of Javanese Kabu Kain. A Redda is a 2.5 meter long piece of fabric wrapped around the woman’s waist. A Hat is a blouse, with a round or v-shaped neckline. 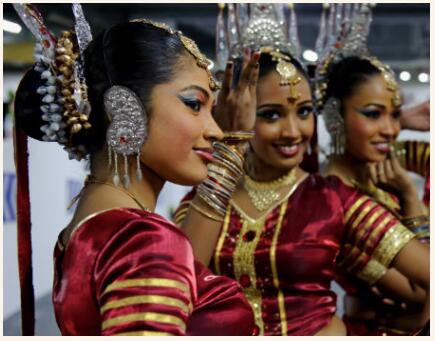 Food and specialties of Sri Lanka

Sri Lankan cuisine has been influenced through many historical and cultural factors but is largely akin to food from India. Today, some of the most basic foods in Sri Lankan cuisine are rice, coconut and spices. Spices are especially used extensively, due to the country’s previous status as a spice producer and trading post over several centuries. The use of fresh herbs and spices makes the dishes extra tasty, but also strong.

Although Sri Lanka’s specialties are largely derived from India, in many ways they are quite different. The main dishes of Sri Lanka are boiled or steamed rice, served with curry of fish, chicken, beef, sheep or goat. Dishes are often accompanied by fruits or vegetables, with chutney or sambal, which is a strong sauce made primarily on chili.

Many of Sri Lanka’s festivals are based on the Buddhist calendar, which is a lunar calendar. The times of the holidays are therefore calculated year by year, and will not, as we know it, have a fixed date. A Buddhist holiday also begins with a visit to the local temple, where food is brought as sacrificial offerings to monks, who in turn give a sermon on dharma. Next, recite the Five Prescriptions, pray or meditate.

If you travel to Sri Lanka around the first full moon in March, you will experience the holiday Sangha Day, which is primarily celebrated in Sri Lanka. The word sangha can refer to both monks and lay people, but Sangha Day is held in honor of the monastic order. At this festival, people gather in the local temple with food and gifts for the monks, after which they walk around a picture of Buddha or walk through the temple. three times – Once for each of the three jewels of Buddhism Buddha, Dharma and Sangha.