According to Countryaah, Uzbekistan is a Central Asian state and is best known for its importance for the Silk Road. The old trade route connected China with the Mediterranean. Silk, spices, precious metals and other coveted trade goods, but also cultural goods and religions, were spread in this way.

Richly decorated mosques, madrasahs and caravanserais are the most important sights, they testify to the cultural wealth and the eventful history of the region. Large squares like the Registan in Samarkand exude a special majesty and are simply fascinating. The Registan is flanked by three madrasas, the portals of which are decorated with beautiful, colorful ornaments. It is also colorful in the capital Tashkent, at the large Chorsu bazaar, which is hidden under a huge green dome with blue ornaments. And in Bukhara, the Poi Kaoln building complex, which is formed by a minaret, a mosque and two madrasas, is well worth seeing. 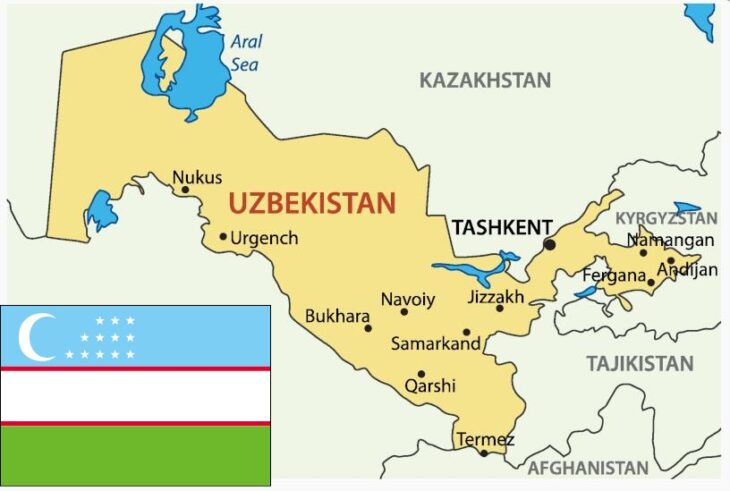 The landscape of Uzbekistan is characterized by deserts, semi-deserts, steppes and mountains. In the Fergana Valley in the east of the country, on the other hand, there is a comparatively mild climate: It is of great importance for agriculture.

Entry requirements
To enter Uzbekistan, German citizens need a passport with sufficient validity (planned length of stay + three months). As of January 2019, a visa is no longer required for trips of up to 30 days.
Children need their own identification document, entry in their parents’ passport is no longer accepted.
At the airport in Uzbekistan, travelers have to fill out two customs declarations, whereby the first is returned directly upon arrival and the second is stamped and has to be ready upon departure.
Every hotel in which you stay during your vacation in Uzbekistan will be registered and you will receive a confirmation. These must be kept carefully, as you must be able to show them on request when you leave the country.

Currency
Uzbekistan uses So’m (UZS) to pay for.
ATMs are rare and often empty. It is therefore advisable to bring enough cash (recent US dollars or euro bills in very good condition) to Uzbekistan and exchange them on site. Credit cards are rarely accepted. Paying with dollars or euros in the shops is also often possible.

Climate
Uzbekistan is characterized by a continental climate: the long summers are hot and dry, while the winters can be very cold. Especially in the high mountain regions there can be too much precipitation in winter.

language
Uzbek is the official language of the country. Due to their former membership in the Soviet Union, many locals also speak Russian.
“Assalomu alaykum!” Is Uzbek for “good afternoon”.

Telephone / Internet
The international dialing code in Uzbekistan is +998.
Cell phone reception is not available everywhere. There are internet cafes for internet use. Good hotels also offer their guests WiFi.

Electricity & mains voltage
The voltage is 220 to 240 volts, 50 Hz, so that all devices can be used without any problems. As a rule, two-pole plugs are used.

Emergency numbers
Fire Brigade 101
Police 102
Ambulance 103
Arrival by flight
The country’s national airline is Uzbekistan Airways and offers direct flights between Frankfurt / Main and Tashkent. The flight time is about six hours.
Transfer connections are offered by Air Baltic, Aeroflot and Turkish Airlines, among others.

Best travel time
Pleasant travel times for Uzbekistan are April to June and September to November. July and August are very hot and dry months and rather unsuitable for cultural trips to the Uzbek cities.

health
The health care in Uzbekistan is by no means comparable to the Western European standard and in many areas of the country is inadequate. Therefore, a first-aid kit should be in your luggage. Imported drugs must be listed in detail in the customs declaration, please note the customs regulations of the country. You should also take out good travel health insurance.
There are no mandatory vaccinations, but it is recommended to check the standard vaccinations for completeness. According to the Foreign Office, mosquito repellants should be provided, especially in the months from June to October, in order to reduce the risk of malaria.
The tap water in Uzbekistan should not be drunk.

Austrian Representation
Austria has no representation in Uzbekistan. In an emergency, contact the Embassy of the Federal Republic of Germany on site.

Note: Central Asian Uzbekistan puts culturally interested travelers in a state of emergency: Magnificently decorated mosques and madrasas that exude an unbelievable grandeur, huge squares, minarets, illustrious names such as Samarkand and Bukhara and the Uzbek handicrafts enchant every visitor. The legendary Silk Road shaped Uzbekistan in a unique way and left behind an extraordinary cultural landscape. The barren mountains and deserts, the Ferghana Valley and the beautiful desert city of Khiva set attractive accents.