As a country that starts with R listed on Countryaah.com, Romania borders on five countries: Bulgaria to the south, Ukraine and Moldova to the north and east, and Serbia and Hungary to the west. The Danube Delta and the Black Sea coast put their stamp on the east of the country; the Karpartenbogen with its peaks up to 2,455 m high dominates the central area and the highlands it encompasses to the northwest: Romania is characterized by one third each of the flatlands, the highlands and the mountains. 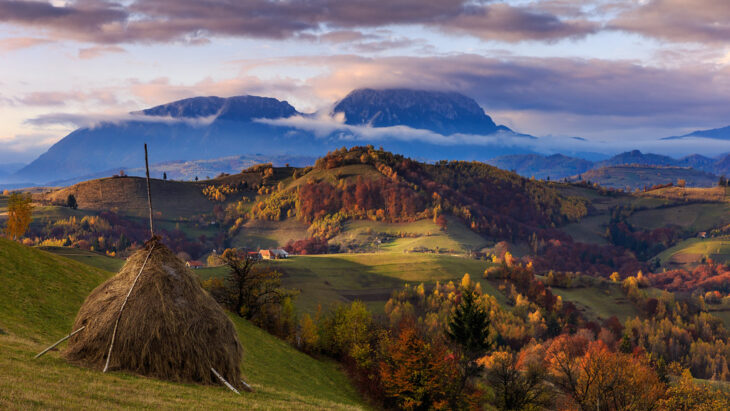 Nine of us find our place in the small hut on stilts deep in the forest, outside it gets dark. We stare at the clearing and the feeding troughs. The forests around us are inhabited by bears – will we see any today? Our tour guide Hermann and the forester talk in Romanian. “There, there,” says Hermann, and we drive up: “Where? Where is he? ”Hermann only meant“ Yes, yes ”.

After an hour of waiting, a shadow appears between the trees and a bear trots out. He wipes the lid of a feeding trough and smacks his lips. It happens that they come within twenty meters of us. If “the blonde” turns a lap, the big black guy immediately follows behind. Yes, that’s how it is during the rutting season. As we leave the hut, a large specimen emerges from the bushes and growls. No movement, the forester indicates.

For this trip we have packed together the history of the Transylvanian Saxons, historical cities such as Sighișoara (Schässburg) with Dracula Castle Bran and nature experiences such as wolf watching. There are always conversations along the way: with the goatherd or the charcoal burner couple, who explain how they keep the wood on the Glosen.

Arrival in Sibiu. We are expected by our German-speaking guide and brought to the hotel in Sibiu. Before dinner we visit the historic old town, which is considered one of the most beautiful city ensembles in Transylvania. The city was founded in the 12th century by settlers from the Moselle region. The close relationship with Luxembourg stems from this time, reminiscent of several corners of the city. The center is located around the Großer Ring (market square). The magnificent Brukenthal Palace is located here, named after Samuel von Brukenthal. He is the only Transylvanian Saxon who became governor (chairman of the administration) and in this capacity administered Transylvania for Empress Maria Theresa. Today the palace houses a museum with an impressive collection of paintings that played a central role, when Sibiu was named the European Capital of Culture in 2007. Not far away is the Protestant parish church, from whose tower you have a fantastic view over the city center. In the churchyard, which is also the schoolyard of the Brukenthal school, we are greeted by the statue of Bishop Teutsch. He wrote the first comprehensive chronicle of the Transylvanian Saxons. There is a lot to discover in Sibiu: the modern, pulsating life here runs in harmony with history. We eat in a restaurant in Sibiu.

From Sibiu through the hill country to Malmkrog

After breakfast there is time for an individual stroll through the city. At noon we leave Sibiu and drive through a contemplative, quiet landscape, stop for a picnic on the way and reach the village of Malmkrog in the afternoon. It is characterized by a long history and, like other villages in the region, is part of the program for the preservation of historically significant places in Transylvania, which is sponsored by the English Prince Charles.
The Hungarian noble palace, renovated in this way, is the ancestral home of the Apafi family. There is also an important fortified church belonging to the Transylvanian Saxons. Many Transylvanian Saxons still live in the village today. No wonder it also impresses with its location, only 12 km away from the main road, surrounded by forests. We spend the night with families in historic farmhouses and enjoy traditional and proverbial hospitality.

Overnight in simple farmhouses in Malmkrog (or another village managed by the Mihai Eminescu Trust). The rooms share bathroom and toilet.
(F / M / A)

After breakfast we stay in Malmkrog. Then we continue to Sighişoara (Schäßburg), where a special kind of tour awaits us: Schäßburg is the only inhabited medieval castle in Transylvania. The city was founded in the 13th century as the sixth castle by the immigrant Saxons, hence its name probably derives from it (Latin castrum sex). The historic old town has been included on the UNESCO World Heritage List. Here, the medieval flair accompanies us at every step. We visit the sights, e.g. B. the clock tower, the landmark of Schäßburg, the 700-year-old monastery church, the mountain school with the 150-step student staircase and various guild towers. If the opportunity arises, we can take part in an “interethnic encounter”
From Schäßburg we drive 40 km further east and reach the village Viscri (Deutsch-Weißkirch) with its idyllic location away from the main traffic routes. Here we get the feeling that time has stood still: gable facades of baroque manors line Langgasse, geese and goats cross the path, the fortified church of Deutsch-Weißkirch is a UNESCO World Heritage Site. On the initiative of the energetic councilor Caroline Fernolend, a tourism association was founded in which the remaining Saxon, Romanian and Roma families successfully work together.
In the afternoon we leave Deutsch-Weißkirch and drive south towards Burzenland, as the area around the city of Braşov (Kronstadt) is called. Our destination: the Romanian mountain village Magura in the middle of the Piatra Craiului National Park. Here we will move into the cozy guesthouse of the Kurmes family, the Villa Hermani, at an altitude of 1,050 m for the next few days. Our partners Hermann and Katharina Kurmes are founding members of the Romanian eco-tourism association. Your travel agency emerged from what was once the largest conservation project for wolves, bears and lynxes (Carpathian Large Carnivore Project). The cozy guesthouse is located on a beautiful high plateau, surrounded by meadows and widely scattered farms. Villa Hermani is our homely base camp for the next few days.

Overnight at the Pension Villa Hermani in Magura
(B / L / D)

We hike through the mountainous settlements of Magura and Pestera, which extend over the wide plateau between Königstein and Bucegi. The courtyards are far apart like pearls on a string. The farms seem like an idyll that children only know from books, everyone keeps sheep, cows and chickens, some also a horse or a donkey. In summer the shepherds move with their herds into the mountains and stay there until autumn. Of course, bears and wolves also live in the vicinity of the villages and pose a threat to the animals, but the shepherd and his pack of wild-looking dogs protect the sheep.

With the horse and cart in the Burzental, optional bear watching

We start the day with the descent into the Burzental. A horse-drawn vehicle is waiting for us there and takes us at a leisurely pace to the starting point of the hike in a side valley. Apart from the rural residents of the two mountain farms, we will hardly meet any other people today. We climb a ridge and look for traces of wolves, bears and lynxes, which are still numerous in this area. At the end of the hike, our horse-drawn carriage is waiting again to bring us back to civilian life.

Option: Some may want to venture out again for an adventure: How about watching wild bears in the forest from an elevated position? Professionally guided by a forester. We don’t return to Magura until late in the evening. Extra costs: 45 euros

Hike to the “Dracula” castle

In the morning we hike over a ridge that leads us at 1,500 m to the Bran Castle, which became famous as the castle of the legendary Prince Dracula. For centuries, Bran Castle was the border and customs station between Austria-Hungary and Wallachia. In 1920 the city of Kronstadt donated the castle to the Romanian royal family. Queen Maria and her daughter, Princess Ileana, fell so much in love with the place that they lived there until they were expelled in 1948. Only a few years ago the castle was returned to the heirs. We return to the pension with minibuses.

Bear reserve and hike to Wolkendorf

In the morning we drive to Zarnesti, where we first visit the bear reserve established in 2005. 80 European brown bears found a new home in an oak forest. These animals have been in captivity for years and can now enjoy their life in a natural area. From the bear reserve we start a 3-hour hike over a gentle ridge to Wolkendorf, the birthplace of Hermann Kurmes. We can observe many birds along the route, including the habitat of the red killer and the black-fronted shrike, but also of woodpeckers and the hoopoe. The path leads through a park landscape with large, single trees as well as through deciduous and coniferous forests. In Wolkendorf we are welcomed hospitably, fortify us with coffee and cake and then explore the well restored and lovingly cared for fortified church. Return to Villa Hermani by minibus.

Today we hike through the imposing Prăpăstiile Zărneştilor gorge with its steep rock faces. The gorge is not only a paradise for climbers, but also for rare species of birds such as wall creepers and alpine swifts. We climb to the Curmatura refuge (1,470 m), which is sung about in many songs about the Königstein. In summer it is the preferred meeting place for young mountain lovers. In good weather conditions we climb over the ridge of the Kleiner Königstein (1,818 m) and enjoy wonderful views of the Burzenland. We descend into the valley and hike back to the pension.

Kronstadt and farewell to Transylvania

After breakfast we drive to Kronstadt, the old trading metropolis of the Transylvanian Saxons, and start a city tour. In the city center, the Black Church, the Honterus School and the Town Hall Square bear witness to the glorious times of the past. The Black Church is the largest Gothic cathedral in Southeast Europe and has a unique organ: It is equipped with 4,000 pipes and one of the few surviving and still used organs by the Berlin builder Buchholz. Then it’s on to Sibiu and the airport. Depending on the departure time, time is planned for lunch on the way. 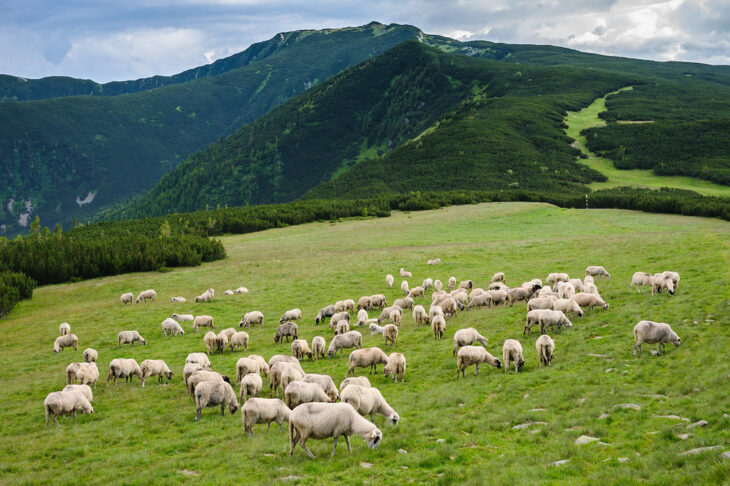