Sights in the Algarve


The popular holiday region of the Algarve is located in the very south of Portugal. This Portuguese area with its fine sandy beaches, the turquoise blue sea, secluded bays and picturesque, white fishing villages promises a heavenly vacation for sun worshipers. Around three thousand hours of sunshine a year ensure a pleasant, mild climate – all year round.

The rocky coast with its imposing rock formations has made this destination famous. In addition to breathtaking nature, there is also a rich cultural heritage to discover. The name Algarve is of Arabic origin and means “the West”. In the southernmost region of Portugal there are numerous luxury hotels, picturesque golf courses, diverse hiking trails and great beaches also for surfers.

Of course, the Algarve also has a lot to offer in culinary terms. You can taste traditional and homemade dishes. The dishes cataplana and xarém are known, for example. The first is a seafood stew, the second is a corn soup with clams and sausages.

In the following we present you the most exciting tours, the most beautiful attractions and the best sights in the Algarve. 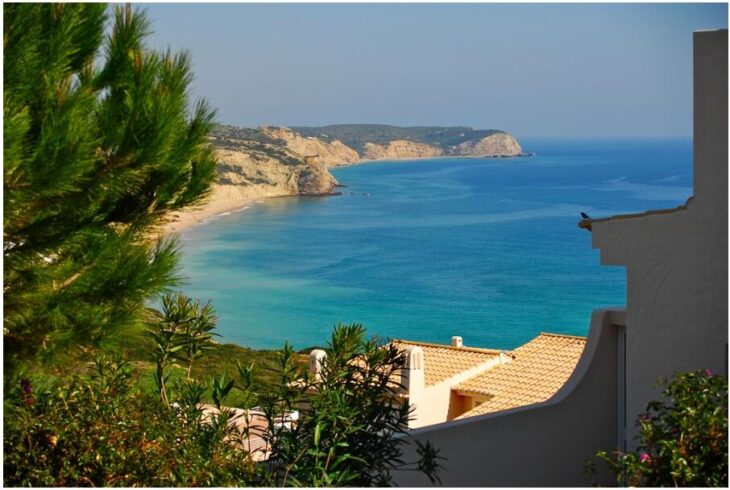 The Cape Saint Vincent is located near Sagres and was formerly also called the end of the world. It forms the most south-westerly point of Europe and is washed by the rough waves of the Atlantic. With its lighthouse, the cape is a popular destination.

The lighthouse is about thirty meters above sea level. From the cliff you have a fabulous view of the Atlantic Ocean – an excellent place to watch wonderful sunsets.

The “peak of piety” protrudes near Lagos as a headland with its wild, jagged cliffs into the sea. From this peninsula you can see far across the Atlantic. High rock formations alternate with hidden bays and sandy beaches. There is also a lighthouse on this cape. Two hundred steps lead from the lighthouse to the sea and down to the rocks.

A distinction is made between the rocky Algarve and the sand Algarve. The rocky Algarve as a spectacular rugged coast with high cliffs and numerous caves lies in the west. The sandy Algarve with its flat coastline and kilometers of sandy beaches and dune landscapes is located in the east of the region.

3. Mountains of the Serra de Monchique

The Serra de Monchique is a mountain range in the western Algarve and is very popular with hikers. The mountainous region and the rural surroundings form a contrast to the southern Portuguese beach life. The highest point of these mountains is the 902 meter high mountain Fòia.

The Fòia is the highest mountain in the Algarve. Those who climb the summit are rewarded with a fantastic panoramic view of the Portuguese south coast. Monchique is a small town. Its surroundings attract holidaymakers with forests, mountains, springs and orchards who want to enjoy the rural seclusion, the tranquility and the beauty of the landscape.

The city of Olhão is located on the sandy Algarve between Faro and the Spanish border and is a busy fishing village. Here you can visit the largest port in the Algarve. You can watch how the fishing boats return to the port with their catch and how freshly caught fish and seafood are offered at the Mercado de Olhão at the port. The city enjoys the reputation of being the culinary stronghold of the region. Lovers of fish and seafood will get their money’s worth in the numerous fish restaurants.

The annual seafood festival takes place in August, with six days of feasting and celebrating in the open air. Olhão has an interesting historical center with baroque churches and a fortress from the seventeenth century. Near Olhão is also the beautiful Ria Formosa Natural Park, which was chosen as one of the seven natural wonders of Portugal.

The Vicenza coast is part of the largest natural park on the Portuguese coast. Here you will find an Algarve far from tourism. There is still a largely untouched nature there with a species-rich flora and fauna. Numerous amphibians and reptiles and around two hundred species of birds live in the Costa Vicentina.

White storks nest on the sea cliffs and otters also feel at home here. Nature lovers can go on long hikes in the nature park. In addition to untouched nature, you can also experience cultural sights of the Algarve in the historic town of Aljezur in this region. 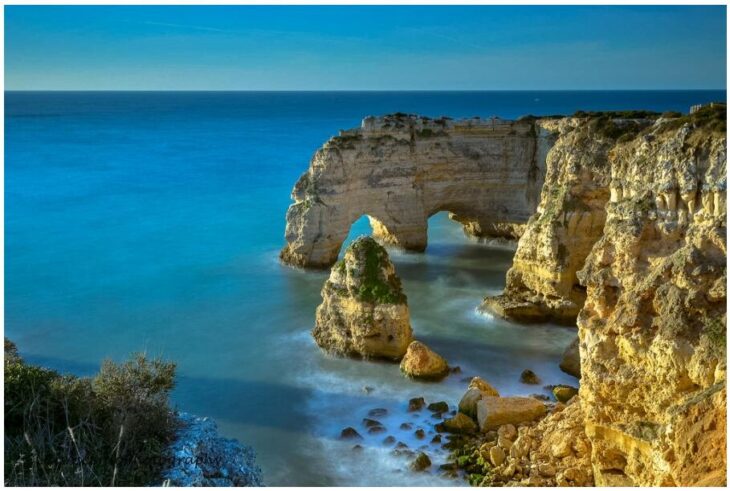 6. Albufeira – between romance and bustling nightlife

Albufeira is a former fishing village. Today the municipality with around twenty thousand inhabitants is probably the liveliest holiday resort in the Algarve. Holidaymakers will find numerous cafes and restaurants and an extensive nightlife to party the night away. There are two popular beaches in Albufeira and also some historical sights in the old town.

Albufeira is not only a holiday destination for party-goers, but also for couples and families with children. Because in addition to the party slope, there is also a great old town as separate districts, so that the party crowd and holidaymakers looking for relaxation do not get in each other’s way. In addition, great luxury resorts such as the EPIC Sana Hotel have settled near the city.

Faro, the capital of the Algarve, is also definitely worth a visit. The city has its own port and not far from the center the international airport, where most of the Algarve travelers land. The most famous sights are the church of Nossa Senhora do Carmo, the cathedral Sé and the maritime museum Museu Marítimo.

The historic old town of Faro is comparatively small. It is surrounded by thirteenth-century medieval fortifications and the streets are paved with white tiles. Faro’s bone chapel, the Capela dos Ossos, is located in a garden. When the chapel was built, thousands of skulls and bones were embedded in the walls. Visitors are greeted with the Portuguese inscription “We, the bones that lie here, are waiting for you” when entering.

Praia de Falésia in the Albufeira district is one of the most famous beaches in Portugal. Some even call it the most beautiful beach in Portugal. The cliff beach of six kilometers in length impresses with its fine sand and clear water. It is a popular destination for tourists and locals, especially in summer.

The bay is famous for its red sandstone cliffs that surround it and are lush with pine trees. The sea here is usually comparatively calm and suitable for swimming. The best way to get to Praia da Falésia is by rental car. Coming from Albufeira, follow the turn to Olhos de Água and then follow the signs.

9. The Moorish castle of Silves

A Moorish castle, which is well preserved, stands on a hill above the town of Silves. It is the largest and best preserved castle in the Algarve and is surrounded by eleven towers and massive walls. The castle bears witness to the Muslim architecture of Islamic culture as it once existed in Portugal in the eleventh century.

The landmark of Silves is the Castelo dos Mouros built from red sandstone. The old ruin lies in the vast forests of the Serra De Sintra and is part of the Sintra cultural landscape, a UNESCO World Heritage Site. After the increasing decline, the ramparts were extensively renovated at the end of the 19th century.

10. Walk along the Via Algarviana

On the almost 330 kilometer long Via Algarviana, the entire beauty of the Algarve can be enjoyed with all your senses. The centuries-old pilgrimage route leads from eastern Portugal to the south-western cape of Europe. You wander between lonely dirt roads, fantastic cliffs and picture-book landscapes and are always accompanied by pleasant smells such as the almond blossom.

Of course, there are also numerous spectacular viewpoints on the route that leads from the coast through the interior. The Via Algarviana is divided into a total of 14 stages, which at normal speed include between four and eight hours of hiking. The longest day’s stage is 30 kilometers. An unforgettable experience! 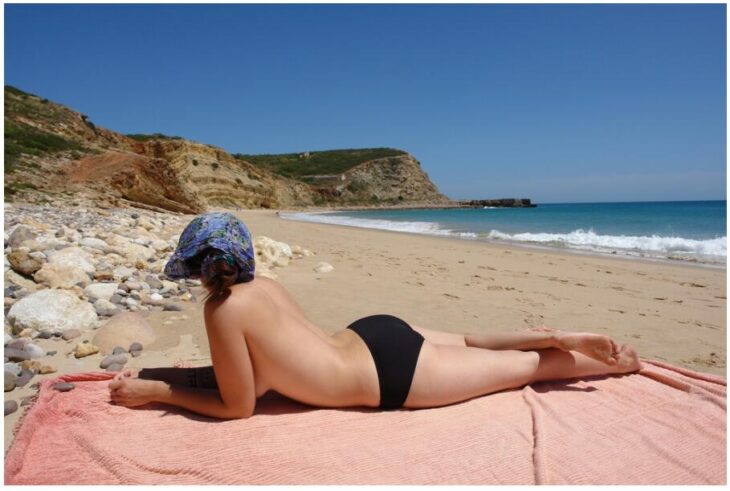